What Are Common Greek Last Names and Meanings: 100 Greek Surnames

A Greek name is easily distinguishable as being, well, Greek. Not only do these names sound really cool, they also have interesting meanings. Below is a worldlastnames.com list of 100 common Greek last names and their meanings, some being very common whilst others are quite unusual, even in Greece. 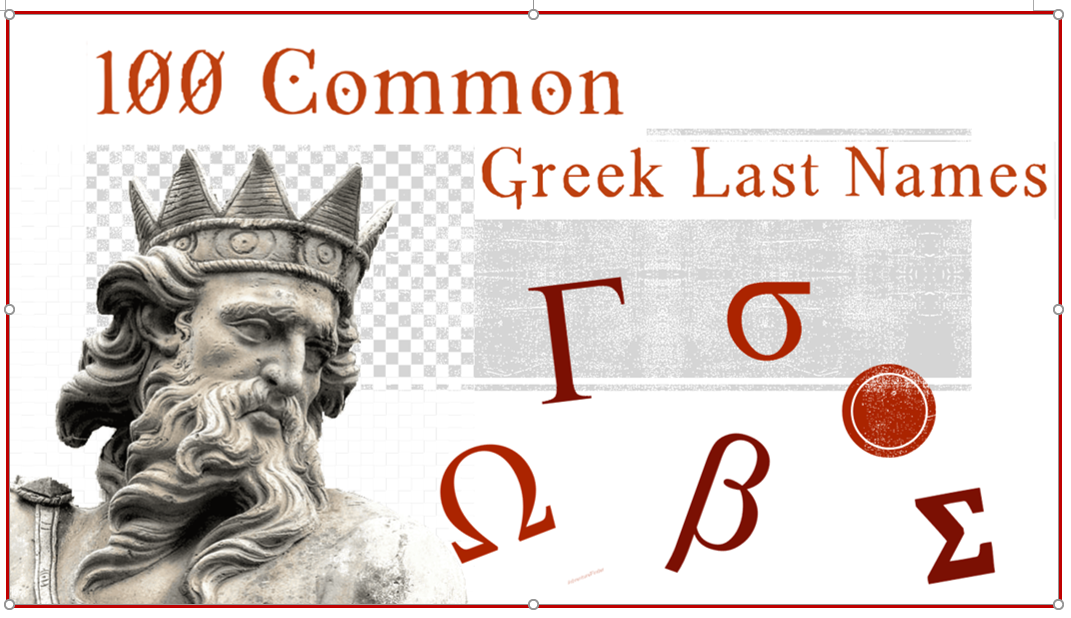 Listed below some of the most popular Greek Surnames and their meanings:

So let’s look at the etymology of some of the most common Greek surnames:

Paleologos: From the mtgn.rim.paleiologo, I say, I talk about ancient-old things. Last name of the last dynasty of Byzantium. A very common surname today, mainly due to the use of “Paleologos” as a baptismal font.

Vassilopoulos: Quite a common surname, with an obvious origin from the baptismal Basil, with the also common way of forming a surname with the suffix -opoulos.

Economou: Very common Greek surname, mainly due to the meaning of the word economist as an ecclesiastical official, clergyman, responsible mainly for the financial management of a church or monastery.

Papadopoulos: Son or descendant of the pope (papadopedi), perhaps the most popular name in Greece along with the suffix -opoulos.

Konstantopoulos: Son or descendant of Konstantinos. Constantine comes from the Latin Constantinus.

Angelopoulos: Patronymic surname derived from the baptismal name Angelos plus the suffix -opoulos.

Rigas: From the modern Greek king, the king (medieval king) in a popular way. It comes from the Hellenistic rix, causal king, which comes from the Latin rex.

Hatzis: Common prefix in many Greek adjectives (Hatzinikolaou, Hatzidimitriou, Hatzopoulos, Hatzidis, Hatzidakis etc.). According to Triantaphyllides: A weak prepositional word that is always followed by the conjunction (-) and entered before baptismal or family names as an honorary title to state that an Orthodox Christian visited the Holy Land as a pilgrim.

Voudouris: A surname which has the same principle as Boudouris, comes from the vernacular / dialectal word voudouris (boudouris) which means short and fat man. The word comes from the Turkish bodur, with the same meaning.

Interestingly, the ancient Greeks themselves did not have surnames as we know them to be today. The names they did have, would give an indication of their origin or the tribes that they came from, but not an actual family surname like we have today. Most names came from the names of places, a given nickname or the occupation of the individual. For example, Loukanis, meaning a sausage maker or a butcher, because Loukanis means sausage.

In ancient Greece, Elite families did have a stable last name, but again, they were either patronymics (a name derived from the name of a father or ancestor) or nicknames.

Commonly, Greek last names are derived by adding “Son of” to the end of the fathers name. Again, this indicates origin of the individual. Married women, however, were not identified by their father name, but rather the name of their husband.

Conclusively, there aren’t really specific ancient Greek surnames, as surnames were made common a lot later in Greek history.

Share
Next Most Common Japanese Last Names And Meanings